Written and designed by Peter Apian, 1540

Look carefully at this picture.

Part of the page can move – can you see where? How could you make it move?

Find out how in our Do activity.

This picture is a map of the stars in the sky. The book it is in is all about space.

Stars that are grouped together are called constellations. The animal shapes help people remember where the stars are.

If you could make your own constellation, what animal would it be?

How many stars would you put inside?

This page was made to move around to show what it looks like when stars are moving around the Earth.

In reality, it is the Earth that is spinning around – not the stars!

Follow the step by step guide below to make your own. You can also have a look at the night sky above using a free apps such as Stellarium or Star Walk 2. 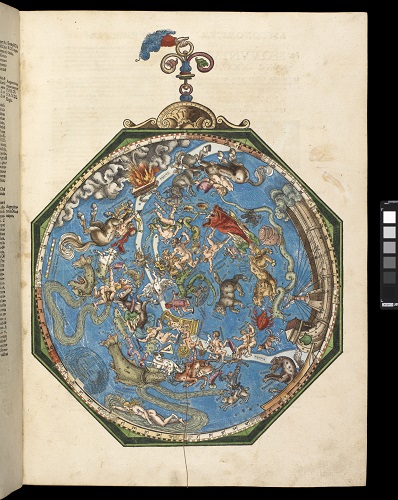 Make a spinning map of the stars

People have always looked at the night sky and told stories about the stars. Sometimes they thought groups of stars reminded them of animals, people or other things. The astronomer who made this book has drawn the people and animals to show us where the stars are. Some of these old stories are still part of modern life – have you ever heard of a horoscope or the signs of the zodiac? That is where these stories began. The man who made this book of diagrams hoped they would help you to find your way around the night sky.

This book, Astronomicum Caesareum (the Emperor’s Astronomy), was published in 1540. It is written and designed by Peter Apian, a professor in astronomy and mathematics at the University of Ingolstadt. While many other books were used by students at European universities, this book was aimed at people who were not experts but wanted to know more about the how the sun and moon, planets and stars moved around the fixed earth (which is what people believed then).

It is a very large book with over 30 movable wheel charts, sometimes also known as volvelles or Apian Wheels. By turning the different paper dials on the page, the reader can calculate the exact position (the latitude and longitude) of the different planets in the sky. There are also volvelles for calculating the date of Easter as well as critical days of an illness. The pages were printed with ink and the colour was added by hand, so almost every copy is unique.

This illustration is borrowed from two prints produced by Albrecht Dürer in 1515. They were the celestial maps to be printed. He produced one depicting the southern and one the northern hemisphere. In this star map, Peter Apian has combined the two. So, when you look at it you may not recognise all the constellations, as some of them are not visible here in England.