Can you spot all the natural forms in the design? A blue tulip, some red carnation flowers, and a jagged-edge leaf called a Saz?

Imagine you were making a set of these tiles to decorate a wall. How do you think the patterns would be repeated?

Try colouring a repeated pattern we created using a tile in our collection. What colours will you use?

Or watch this short film by the Khan academy to find out more about geometry in Islamic art.

Make your own printed repeated pattern inspired by Iznik tiles in our collection, using these easy steps.

Tiny Tweaks – Cut a cardboard template of the carnation of tulip flowers shown in the tile above. Draw around one, then rotate or flip the template and draw around it again. Can you create a pattern using just one shape? 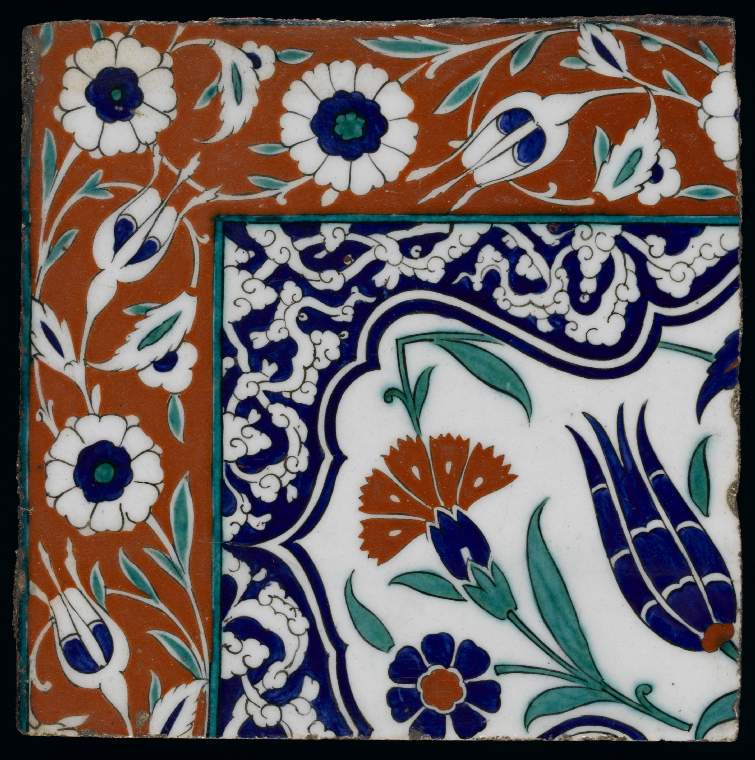 Make your own repeated printed pattern

Ceramic objects with this type of decoration are known as ‘Iznik’ after the town in Turkey where they were first made between 400 and 600 years ago. The craftsmen of Iznik switched from making simple earthenware pottery to elaborately decorated fritware like this. Fritware is clay that has been mixed with quartz or ground up glass so that it goes white when it is fired.

Leaders at the Ottoman Court in Istanbul loved Chinese blue-and-white porcelain, and amassed a large collection of it. The craftsmen of Iznik developed this new style, combining traditional Ottoman patterns and colours with Chinese elements to suit their tastes.

The designs combine traditional Ottoman arabesque patterns (rhythmic patterns that interlace, scroll and are repeated throughout the design) with Chinese elements. From the 16th century, potters in Iznik produced many tiles to decorate imperial buildings and mosques in Istanbul, and many of them can still be seen there today. There was a fashion for floral imagery, such as the roses, tulips and carnations you can see on this tile.

Islamic Art is a general term used to describe works of art and decorated functional objects made throughout the lands where Islam was once or still is a major religious and cultural force. Many themes link objects in our collection, including tiles. For example, calligraphy is a very important art form in the Islamic world. The Qur’an, written in elegant scripts, represents Allah’s—or God’s—divine word. Another characteristic common to Islamic art are geometric patterns, often made up of natural forms , as seen on this tile. The use of geometry is thought to reflect the language of the universe and helps the believer to reflect on life and the greatness of creation. For instance, circles and complex patterns that appear to be never-ending give an impression of the infinite nature of Allah. They also show that in the small you can find the infinite.