Play a game of Tudor Miniature Guess Who:

Suggested questions:  Is your person wearing jewels in their hair? Do they have a beard? Is their outfit mostly black?

What was the benefit of having a very small portrait of someone?

How do we carry around pictures of people who are important to us now?

If you could have a Tudor miniature painted of anybody who would it be and why?

How small can you draw? Practice drawing yourself in a mirror or someone opposite you. No matter how tiny you get, make sure you can still tell who the person is! 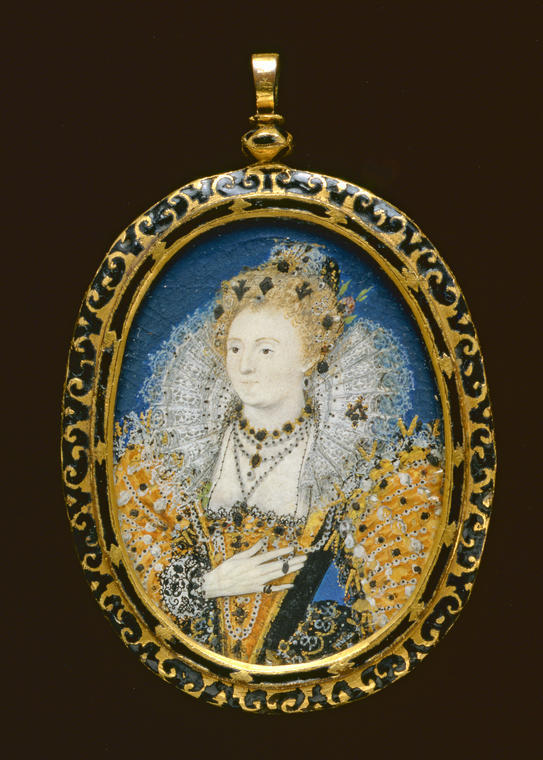 Print out a photo or draw a portrait of someone special. Glue it onto a cardboard square or oval that is a bit bigger than the picture. Decorate the frame taking inspiration from the miniatures in the museum collection. You could sculpt tiny shapes from foil and stick them on, design an elaborate pattern using markers, or use scissors to cut out an interesting shape.

During the Tudor period, miniature painting, or ‘limning’ emerged as a separate branch of portraiture which thrived until it was replaced by photography in the 19th century. The limner’s works became associated with the aristocracy who could give or receive miniatures as tokens of affection or allegiance to the crown. More than twenty miniatures of Elizabeth I by Hilliard are known to exist, all are flattering and show her as youthful even though they were made in the last years of her life.

Miniatures were often kept in jewelled or decorated covers made of gold and precious stones so they looked like lockets. Due to their size, miniatures could be kept secret or revealed. The Museum holds a big collection of miniature portraits, including one of the earliest examples produced in England of a young beardless Henry VIII painted around 1526 PD. 19- 1949

Many miniatures like this one were painted onto vellum which is very fine animal skin, as it was the smoothest surface to paint onto. The vellum would be glued onto a card (often a playing card), to make a firmer support for the portrait. Next the portrait would be painted in watercolours using a paintbrush made from the bristles of a squirrel’s tail so that the tip of the brush was rounded and springy and could paint the finest detail.

The paints for the miniatures were made from the finest quality pigments that would be ground very fine to make sure they had no lumps and then mixed with a medium, usually gum Arabic. The artist had to make sure that everything was kept very clean and tidy so no dust got stuck to the tiny work. Hilliard even suggested wearing silk, and making sure you do not have dandruff when working.

The limner would paint in an order of lighter tones to darker, starting with a pale fleshy pink for the face; then reds; blues and finishing with the hair and jewels. Hilliard was an expert in creating paint effect jewels, he let us know that after applying paint, and a painted shadow to make them look 3D they must be burnished “with a pretty little tooth of some ferret or stoat or other wild little beast.”

If you want to find out more about the artist or techniques used you can read this fact sheet.

Download this resource: Look Think Do – Tudor Miniature Elizabeth I as a PDF or a Word document.