Cloud study with a shaft of sunlight

Clouds come in all sorts of different shapes and sizes. Look closely at this one.

How are clouds made? Where do they come from?

Watch this useful video from The Science Museum Group to find out more.

Explore creating your own ‘skying’ studies.

Lie on the floor or use a mirror to help you look up, what works best? 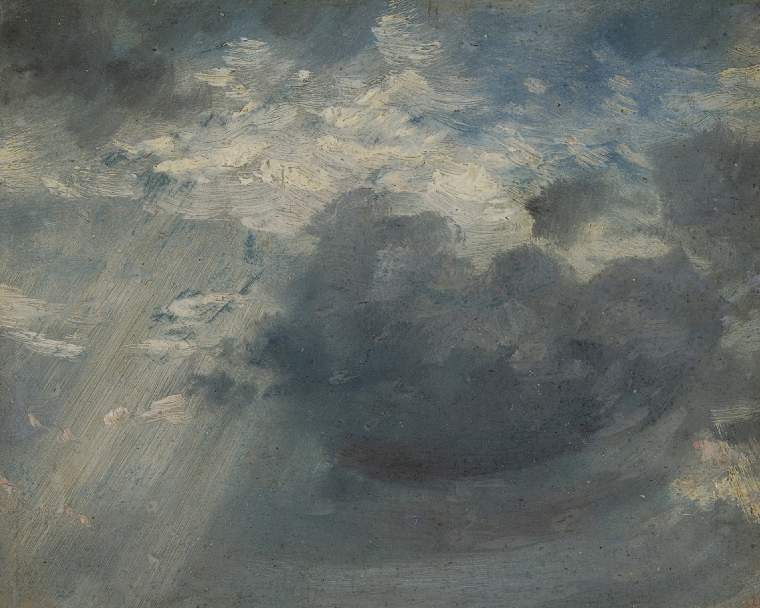 Constable was born not far from Cambridge in Suffolk, the son of a corn merchant who owned two mills. He was largely a self-taught artist, and after submitting sketches he made on a tour of Norfolk as a teenager, was accepted to study at the Royal Academy Schools in London. He devoted much of his life to painting local landscapes, which is why Dedham Vale, the area surrounding his family home is now known as ‘Constable country’.

His determination to capture the rural Suffolk landscape of his boyhood might have been due to a sense that this way of life was changing rapidly due to Industrialization. From 1819, because of his wife’s ill health, Constable rented a house for his family on the leafy edge of London in Hampstead. Between 1821-1822 he started making direct studies of cloud formations in the open air, like this example and others in the Fitzwilliam Collection. Constable used the specific term ‘skying’ for his field studies. He warns to be accurate and ‘not to go too much into detail. Because the sky changes all the time, one cannot work longer on a sketch than two hours; for a sunrise or sunset the maximum is half an hour.’ You can see his rapid brushstrokes in this work.

Some scholars attribute Constable’s interest in clouds to the fact he was a miller’s son and knowing which direction the wind blew was important in adjusting the sails of windmills. However, it is also known that he was interested in the new scientific advances in meteorology (the science of the atmosphere), which were being pursued at this time, including Luke Howard and Thomas Foster publishing the first systematic classification of cloud forms.

Constable’s oil sketches of skies show a remarkable understanding of the structure and movement of clouds. Some say they should be regarded as ‘mirrors of the sky’ as many record the time and date they were created on the back and can be logged as matching the weather perfectly that day in history.

You see more sky studies and paintings by Constable by searching our online database.

This painting is part of a wider project on the theme of nature called Inspire Nature. The project was launched in February 2021 with teacher training sessions on the five themes of Water, Skies, Rocks, Viewpoints and Trees. You can find other objects from across the University Cambridge Museums and Garden that link to these themes on our Padlet boards. You can find out more about the project on our Inspire Nature webpages. We will be running further sessions throughout 2021 if you would like to get involved.