Don’t Wash Your Hands: neither light agrees to enter the eyes nor air the lungs, Issam Kourbaj, 2020

‘Eye idols’ are ancient stone figurines, found in 1937-38 during excavations at Tell Brak in Syria.

Look around at peoples’ eyes. How many different shapes can you see?

How could you draw your eyes so others recognise them?

Thousands of Eye Idols like these were excavated from a building now called the Eye Temple.

Why do you think people left these objects together in one place? Do you have any collections of special things?

Make your own eye idol, like these soap ones made recently by Issam Kourbaj. You could use plasticine, play-dough, or blu-tack. Or make some salt dough!

Fancy a harder challenge? Try sculpting blindfolded, like Issam Kourbaj did, guided by your memory.

Want to try out carving in soap? Try following the guide below. 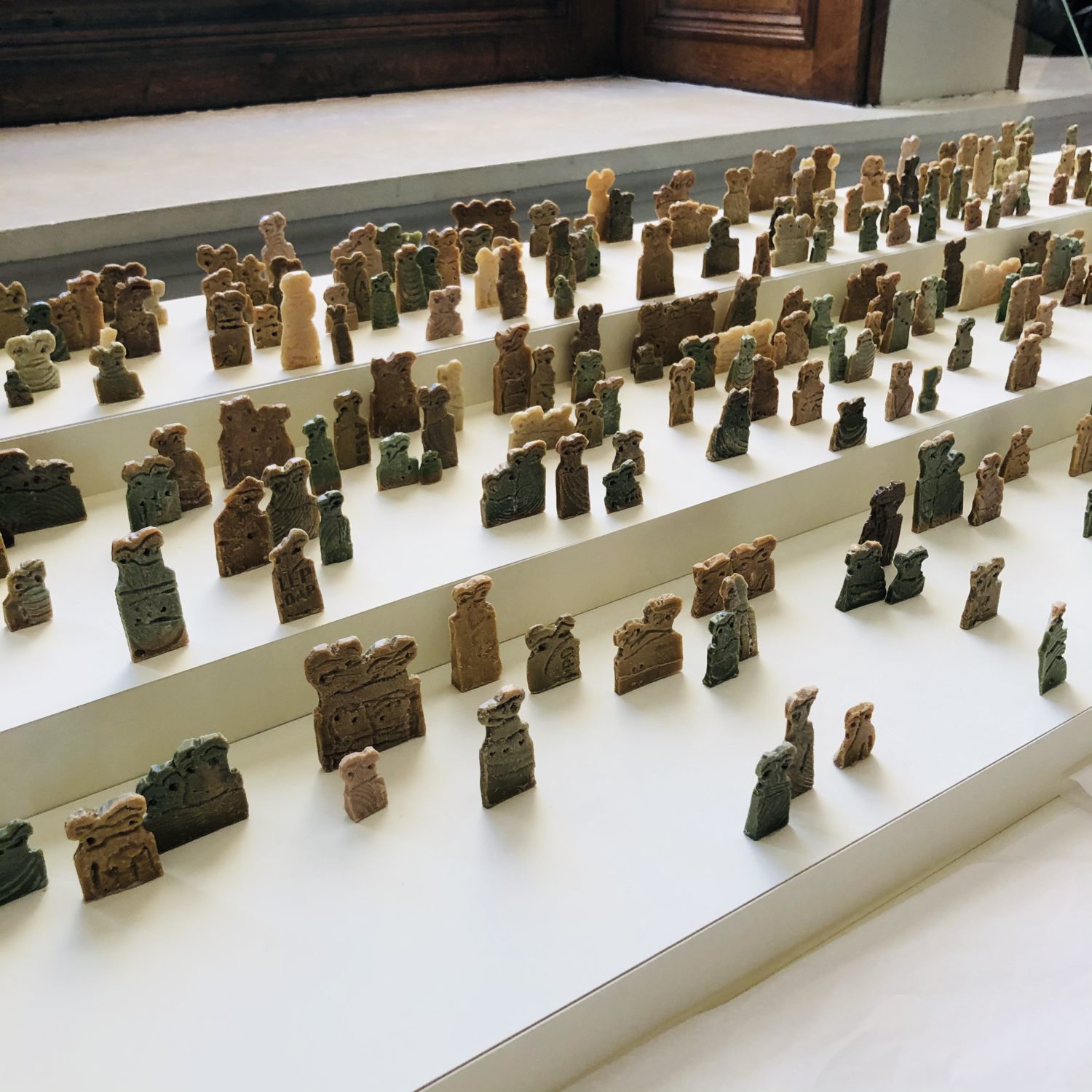 Carve your own eye idol from Soap
More information

These 366 eye idols were created by the the artist Issam Kourbaj in 2020 during the national lockdown. They are made of Aleppo soap, a material invented thousands of years ago by the Mesopotamians in the Ancient City of Aleppo in Syria. This popular soap is still made and used today.

The eye idols have been displayed alongside three unique Eye Idols that are a part of the Fitzwilliam collection. These three idols, made of alabaster, date to around 3200 BC.

Thousands of Eye Idol figurines (dated ca. 3700–3500 BC) made of different types of stone and, more rarely, in fired clay, were excavated at Tell Brak, Syria, in a building now called the Eye Temple. They are often interpreted as votive objects dedicated to an “eye god” venerated in the temple of Tell Brak. Many are incised with multiple sets of eyes, others with jewellery, and some with representations of “children”— with smaller eyes and a body carved on the body of the larger idol. It is believed that the wide eyes demonstrate attentiveness to the gods in Mesopotamian art.

Upon experiencing the ancient figurines at the Fitzwilliam Museum, Issam Kourbaj found that their simplified ‘contemporary’ form and exaggeratedly large eyes spoke volumes about both absence and presence. The work he created for the Fitzwilliam Museum’s display is a cry to the world, pleading that they do not ‘wash their hands’ of Syria, he has dedicated this work to the Syrians who are still unable to see the light or breathe the air of freedom, yet are working towards a better future.

Issam produced the new sculpted works whilst blindfolded. He was inspired by the size of the older objects that could fit easily in a hand, as well as being unable to visit the museum in person due to the national lockdown. This meant he relied on his memory of the objects, but also memories of his families and friends to create new collections of idols. You can hear more about Issam’s process of making in this podcast ‘In My Mind’s Eye’ produced earlier in the year for the museum, and find out more about the works here.