Zoom in on this pot. What can you see?

There are two main types of Greek painted pot.

Which one do you think this is?

Pots come in all different shapes and sizes!

What do you think this pot would have been used for and why?

The answer and a guide to pot types is below.

Design your own ancient Greek pot using the step by step guide and video below. 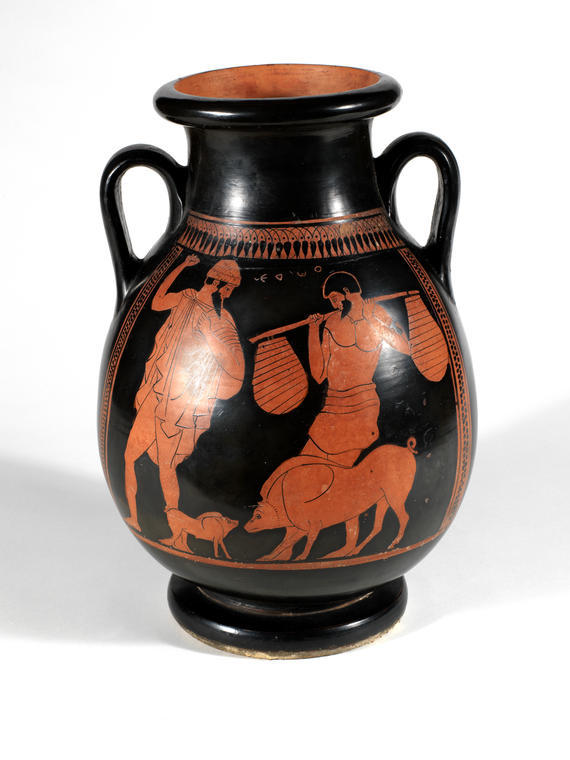 What was this pot used for?

This pot is described as a pelike which is a kind of amphora used for storing liquids.

Do: Design your own ancient Greek pot

Draw the outline of your pot. You can choose one of the shapes from this sheet.

Draw around the outline in pen and then cover your pot with wax.

Paint your pot and then let it dry.

Use a sharp tool to scratch your design onto your pot. You can use patterns and pictures inspired by famous ancient Greek myths and legends.

Children are often surprised at the large number of Greek pots on display in the Museum. There are various reasons why the culture of Ancient Greece is often well represented in museums by exhibitions of pottery. Clay was, and still is a readily available resource, that is easily worked into shapes and serves many basic functions. One reason that the Ancient Greeks made so many pots was that, as in most Ancient cultures, large numbers of pots were made to meet the everyday needs of containing and transporting goods.

Today these same functions are met in our society through the use of a wide variety of materials such as plastic and tin and the application of later technologies.

Pots of all Shapes and Sizes

As the Greeks made pots for a wide variety of functions, the designs of the vessels had to meet various needs. The shape and size of pots is often a common-sense guide to their use; larger pots were used to carry and store more common liquids needed in large quantities, whereas smaller vessels held rarer or more costly substances used in smaller quantities. Narrow necked vessels held liquids to be poured in a slow stream, and the converse is true of wide necked pots used for mixing and more rapid pouring. The decoration of a pot is often also a guide to its original use; make-up containers, for example, often show scenes of women holding mirrors.

However, much of the pottery produced in Ancient Greece had uses that stretched beyond the domestic. These vases were highly prized and were themselves objects of export. Many of the pots in the Museum’s collection are from tombs and sanctuaries, because according to the Greek concept of the afterlife, the well-being of the soul on its journey to Hades or the Islands of the Blessed depended on the continued solicitations of the living. A fairly common feature of Greek burials was a pipe, inserted into the tomb, through which food and drink were poured. Tomb contents often included pottery alongside more personal items such as armour or jewellery. Pots were placed in tombs for purely practical use in the afterlife, but also came to hold associated symbolic meaning in their own right.

On appointed days libations and offerings were carried to the tombs and poured from specially produced pots of distinctive shapes such as lekythoi. Loutrophori, vessels with long necks and elegant volute handles of distinctive shapes were often placed on the tombs of those who died unmarried. The paintings on such pots often show their spiritual function.

The majority of Greek pots on display in museums are examples of fine work produced by some of the most skilled Ancient Greek potters. It is important that children understand that not all pottery made and used in Ancient times was of this standard and that much of it was roughly made and purely functional.

Find out more about ancient Greek pots in our collection here.