Caryatid from the temple of Demeter

Upper part of a caryatid, circa 50 BCE

From the Sanctuary of Demeter at Eleusis, near Athens. GR.1.1865.

This enormous statue is over 2000 years old and used to be part of a temple to the Goddess Demeter.

Look closely: how the statue might have changed over time?

Take a virtual tour of another Greek temple from the Acropolis in Athens here.

Imagine what the statue would have looked like in the gateway of the original temple.

When an English traveller saw this statue in 1801 in Greece, local people were still using it: making offerings of manure (a fertiliser) to help their crops to grow.

Clarke, the English traveller, knew it was important and took it back to England.

Do you think this was fair?

Make a list of the pros and cons of the statue being in the museum.

Ancient Greek people loved to tell the stories of the Gods from memory. Listen to the story of Demeter here.

Try telling someone the story of Demeter and Persephone from memory. 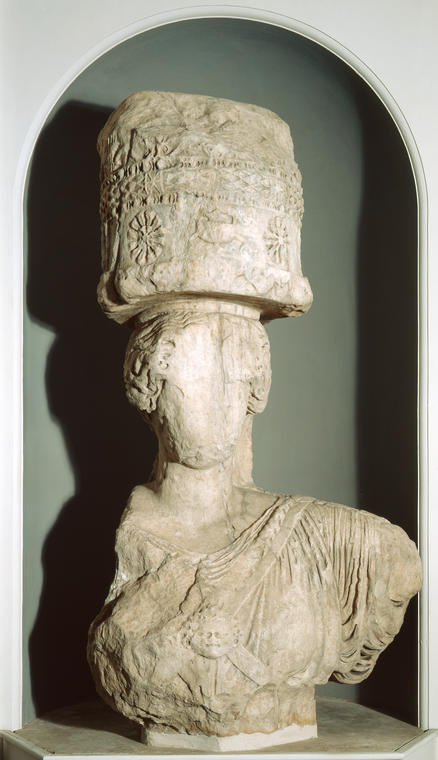 Do: The story of Demeter and Persephone

Can you tell someone the story of Demeter and Persephone from memory, just as the ancient Greeks would have done?

A caryatid is a sculpted figure of a woman that acts as a column on a building.

This is the upper part of one of a pair that stood at a gateway to the inner courtyard of the sanctuary of Demeter, Greek goddess of fertility. It was part of a building programme begun around 50 BC, by which time Greece was a Roman province.

This Roman caryatid resembles the better-known Greek caryatids of the Erechtheion, a temple of the 5th century BC on the Athenian Acropolis. The deliberate reference to classical Athens, a city admired by the Romans, emphasises the connection between Athens and the sanctuary at Eleusis.

The Eleusinian Mysteries, one of the most important of all Greek religious festivals, began with the worshippers walking the twelve miles from Athens to Eleusis. The festival was still important in the Roman period, and some Roman emperors were initiated into the cult. Since participants were sworn to secrecy, details of the ceremonies remain a mystery to this day, but they were connected with rituals of rebirth and the afterlife.

The caryatid was removed from Eleusis in 1801 by E.D. Clarke. The local people used to heap manure around it, believing it protected the fertility of their fields. Clarke identified it as Demeter, but it is more likely to represent a priestess. The figure is very worn, having stood for centuries above ground, but the gorgon head at her breast and the sacred container (cista) on her head are still visible.

The second caryatid from the other side of the gateway is much better preserved. Excavated in the late 19th century, it is now in the Museum at Eleusis.