Look and Think activities should take 5 -10 minutes. Do activities might take longer depending on the task and how creative you are feeling!

Tempera and gold on a wooden panel, M.75

This painting tells the first half of an epic tale and is read from left to right like a cartoon strip. How many times can you see Psyche in her white dress? Can you find Cupid? He has wings and a bow and arrow. Look closely here.

Find out how to read the story below. What do you think happens next?

Write or draw your own ending to the story. Follow our video to make your own mini book. 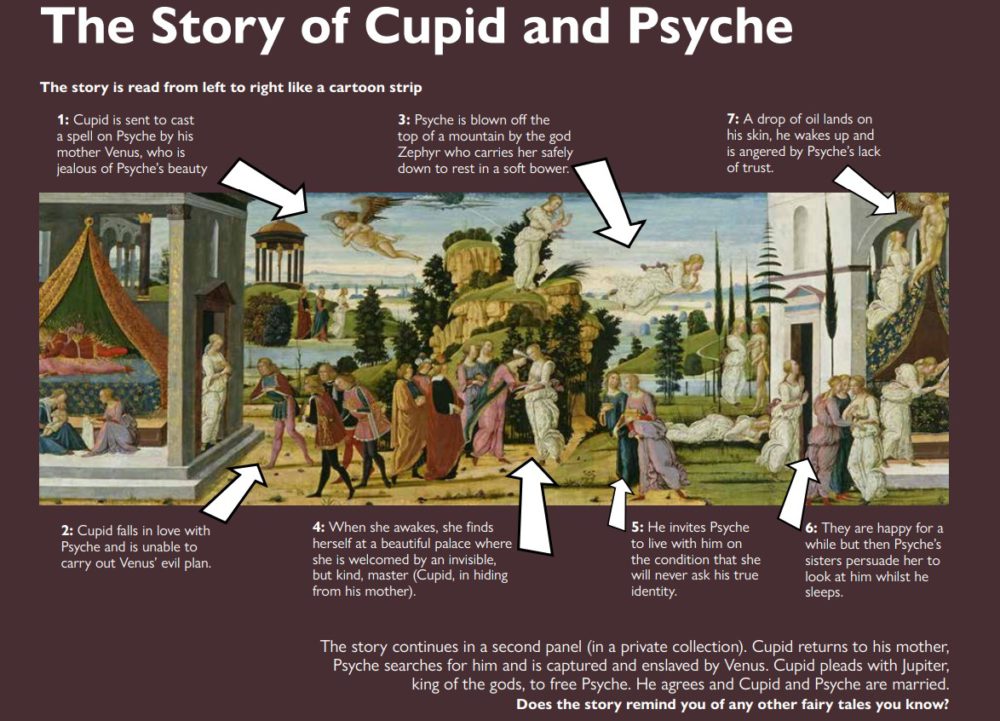 The story is read left the right like a cartoon strip. Fifteen episodes from the story appear across the panel. Many involve the same characters and all take place against a simple background and landscape. Psyche appears twelve times – eleven as a women in a white dress and once as a baby. This method of visual storytelling is called ‘continuous narrative’ and is inspired by classical models such as Roman sarcophagi. This might be confusing today when we are used to seeing single frames of action. However, this was a familiar way of telling stories in Renaissance Italy.

What do you think happens next?

The story continues on a second panel (in a private collection). Cupid returns to his mother Venus, Psyche searches for him and is captured and enslaved by Venus. Venus sets Psyche a series of impossible tasks to prove her love for Cupid. The first is to sort a whole room full of lentils, seeds, rice and poppy seeds. Luckily for Psyche an ant colony took pity on her and helped her complete the task. Next, Psyche needed to collect the fleece of the mythical golden sheep with a violent temper that belonged to the god Helios. Luckily Psyche heard a voice on the wind that wisely told her to instead collect the fleece from plants it had become caught on. Finally Psyche was told to travel to the underworld and to persuade Proserpina – the goddess of the underworld – to donate a drop of her eternal beauty for Venus. Once again the unseen voice of the gods came to her aid – it told her to bring coins to pay the ferryman of the river Styx, and to bring treats for the three headed dog Cerberus. With all her tasks completed, curiosity got the better of Psyche and she looked inside the box containing the drop of eternal beauty. Sadly she had been tricked and instead it contained endless sleep. As Psyche dropped down into eternal sleep, Cupid, who had been watching, pleads with Jupiter, king of the Gods, to free Psyche. He agrees, and Cupid and Psyche are finally married.

Does the story remind you of any other stories you know?

Do: Make your own mini book to draw or write your own ending

A piece of A4 paper

1. Fold your paper in half

2. Fold it in half again

3. Fold it in half once more using your fingers

4. Open it up and mark a the first fold with a cross using your pencil

5. Cut across three folds to get to the cross you have marked

6. Fold it in half again length ways

7. Fold it into a concertina book, the middle pages will be joined together.

8. You might want to plan your drawings and story before you put them into the book?

Jacopo del Sellaio was born and worked in Florence during the Renaissance, at a time when the city was emerging as the cultural and artistic centre of Europe. He was trained by the painter Fra Filippo Lippi and his style of painting uses a light palette of colours and experiments with linear perspective. He was influenced by the artist Sandro Botticelli who trained with him and their work is similar in style.

This colourful panel is from a ‘spalliera’, a decorated backboard. It would either be mounted on a wall as a headboard or attached to furniture, most commonly a ‘cassone’ (marriage chest). These special chests were made to celebrate a marriage, and were part of a bride’s dowry. They were filled with expensive linen and cloths and paraded through the streets from the bride’s family home to her new home as part of the wedding celebration. It would then be used as a piece of furniture in the family home for storage and sometimes as a bench to sit on.

You can find out more about this panel painting in this Looking at Collections resource.

In 2020, 3800 primary aged children from 40 schools across Cambridgeshire were inspired to create their own creative responses to Cupid and Psyche. You can find out more about the INSPIRE project, and see some of their beautiful artworks here.