Pieter Brueghel the Younger, ‘A Village Festival in Honour of St. Hubert and St. Anthony’ (1627)

View
Learning objectives
About this set of resources

Each resource provides a set of learning materials to support these elements:

Alfred Elmore, ‘On the Brink’

Take a close look at this painting and think about the ‘back story’. What might have just happened to this young woman? You might think about what is going on in the room behind her, and what the empty purse in her hand and torn gaming card at her feet suggest. Can you find the shadowed figure of a man behind the young woman? Is he inside or outside the room? What is the effect of having him in shadow? How is the room behind him lit? What are the colours inside the room and how might these be significant? Contrast this to the colours used to paint the scene outside the window. What do you think is the source of light and what might this symbolise?

Summarise your investigations and let’s press ‘play’ on this painting – take the painting’s narrative forward to the next 10 minutes. You could write this as a dialogue to read with a friend. Now it’s crunch time: the young woman has a decision to make. She is already, as the painting title suggests, ‘on the brink’ of this… it’s your choice. What does she decide? Write down your thoughts and then project this woman’s story as a timeline: what happens to her the next day, week, year?  You are creating her narrative.

Paintings such as ‘On the Brink’ were thought of as ‘moral’ paintings. Why do you think that is and who might be shown the importance of making the ‘right’ decision? If you enjoyed this then you might enjoy investigating the story in other paintings. 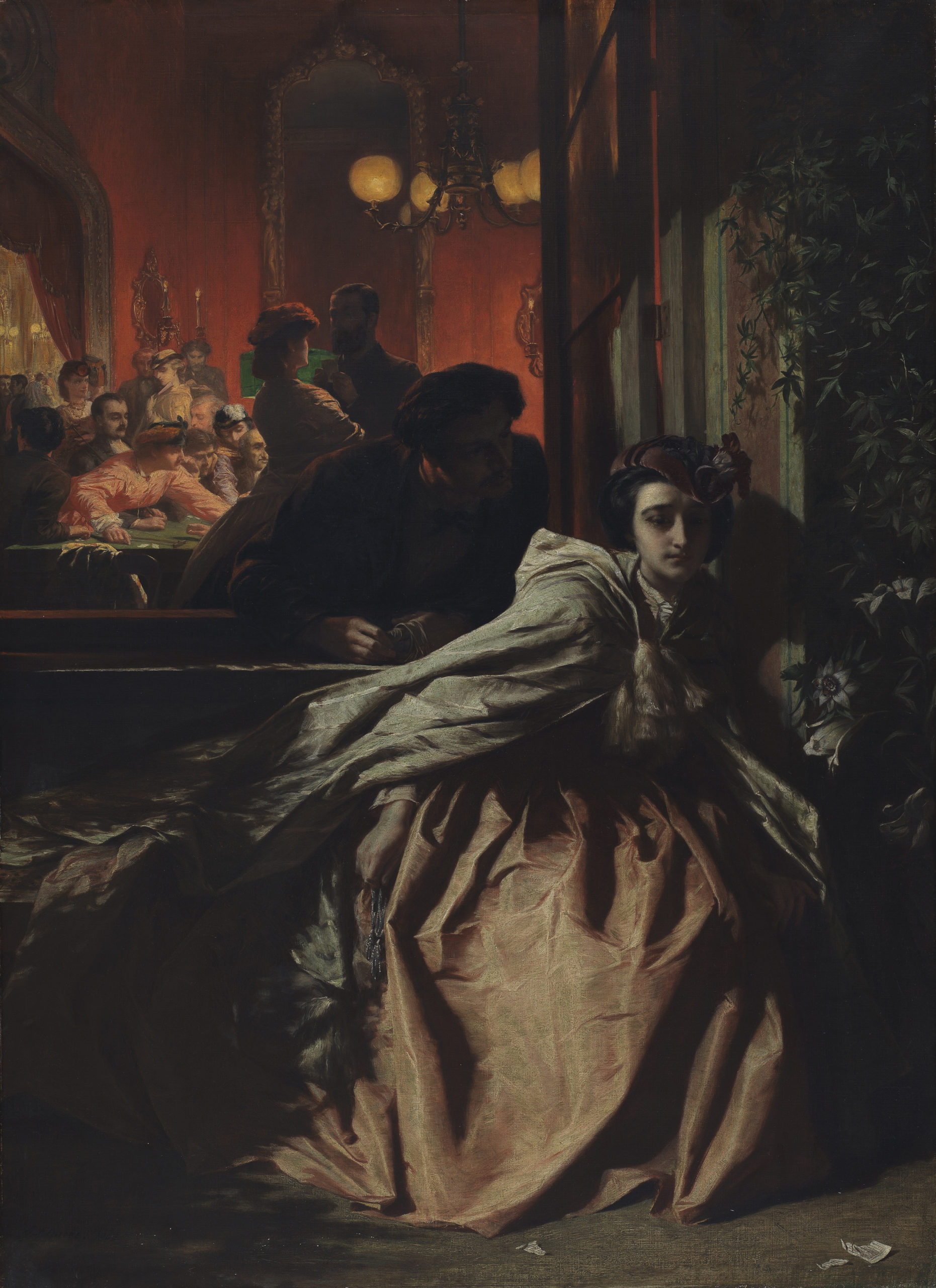 Where do you think a painting like this, showing a scene from the Christian Bible, might have been displayed originally? (It was once part of an altarpiece in a church in Florence, Santa Lucia de’ Magnoli.)

Why was it important to paint stories from the Bible at this time (15th century)?

In the previous painting we took the narrative forward – can you do the same with this story? What happened to this young woman over the following year? You might like to find paintings that illustrate her story

Biagio d’Antonio, ‘The Siege of Troy, The Death of Hector’

This painting tells part of the ancient Greek myth of the Trojan War. Research the myth of the Trojan war, and find out which part of the story is shown here. Can you spot the same characters repeated within the image? (Clue: Hector has his name written across his chest.) How does this help with retelling this narrative? The Museum also has a companion painting showing a different scene, ‘The siege of Troy, The Wooden Horse of Troy’. Selected scenes from the story were painted and displayed together to form a visual story, like a giant graphic novel – the viewer could ‘read’ the pictures and identify the characters.

Pieter Brueghel the Younger, ‘A Village Festival in Honour of St Hubert and St Anthony’

Brueghel the Younger chose not to paint a well-known story; instead, here he explores the daily lives of people living in a Dutch village. The people in the painting have been given the day off for a religious festival in honour of St. Hubert and St. Anthony.

This story has many layers. At the time this painting was painted, the Netherlands was under Spanish rule. Do any details refer to this? 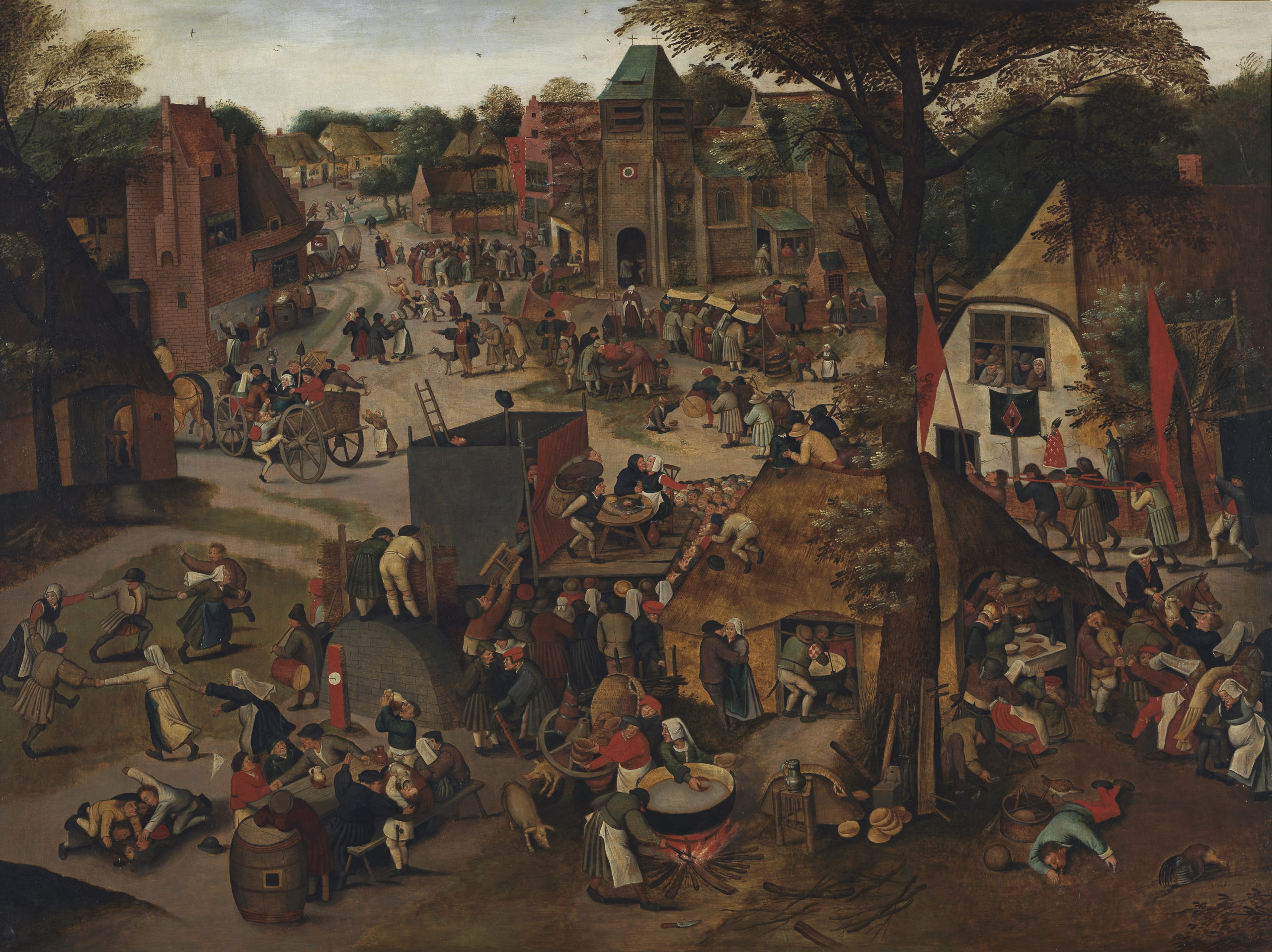 Alfred Elmore, ‘On the Brink’

Put yourself in the young woman’s dilemma. What are the possible outcomes and what might happen if she follows a certain decision or chain of events? Do you see the pure white lily and the purple passion flower? What different paths do you think they represent?

How would a painting like this help you to reflect before you make life decisions? Do young people face similar decisions today?

Discover more about this painting with this factsheet.

Find out the story of the Annunciation from the Christian Bible. In this painting, we encounter a very precise moment in the story – what moment is this? How is this represented through symbolism? You might wish to look at the dove, the writing, the lily, and the facial expressions.

Biagio d’Antonio, ‘The Siege of Troy, The Death of Hector’

There is something strange about the historic setting of this painting. Has the artist depicted this scene in the historical timeframe of ancient Greece? Think about what ancient Greece would have looked like: buildings, costumes, weapons.  Where has the artist instead decided to place Troy in his painting? Do you think it is a ‘real’ place?  Can you identify any of these buildings and work out which Italian city they are in? In a way, this painting is showcasing the Italy that the artist actually lived in and making it seem even grander, adding to the region’s strength and power. Can you do further research to find another depiction of the story of Troy? Where could we find an ancient Greek depiction of this myth?

We could look to ancient Greek vases like this neck amphora made by the Antimenes Painter in c. 530-510 BC. One side shows warriors engaged in battle; the other side shows legendary Greek warriors Achilles and Ajax at rest as they play a game of dice.

Now reimagine the story of the Trojan War in a contemporary style – how would you change the characters, the city, weapons, and the environment? How would this change the scene? 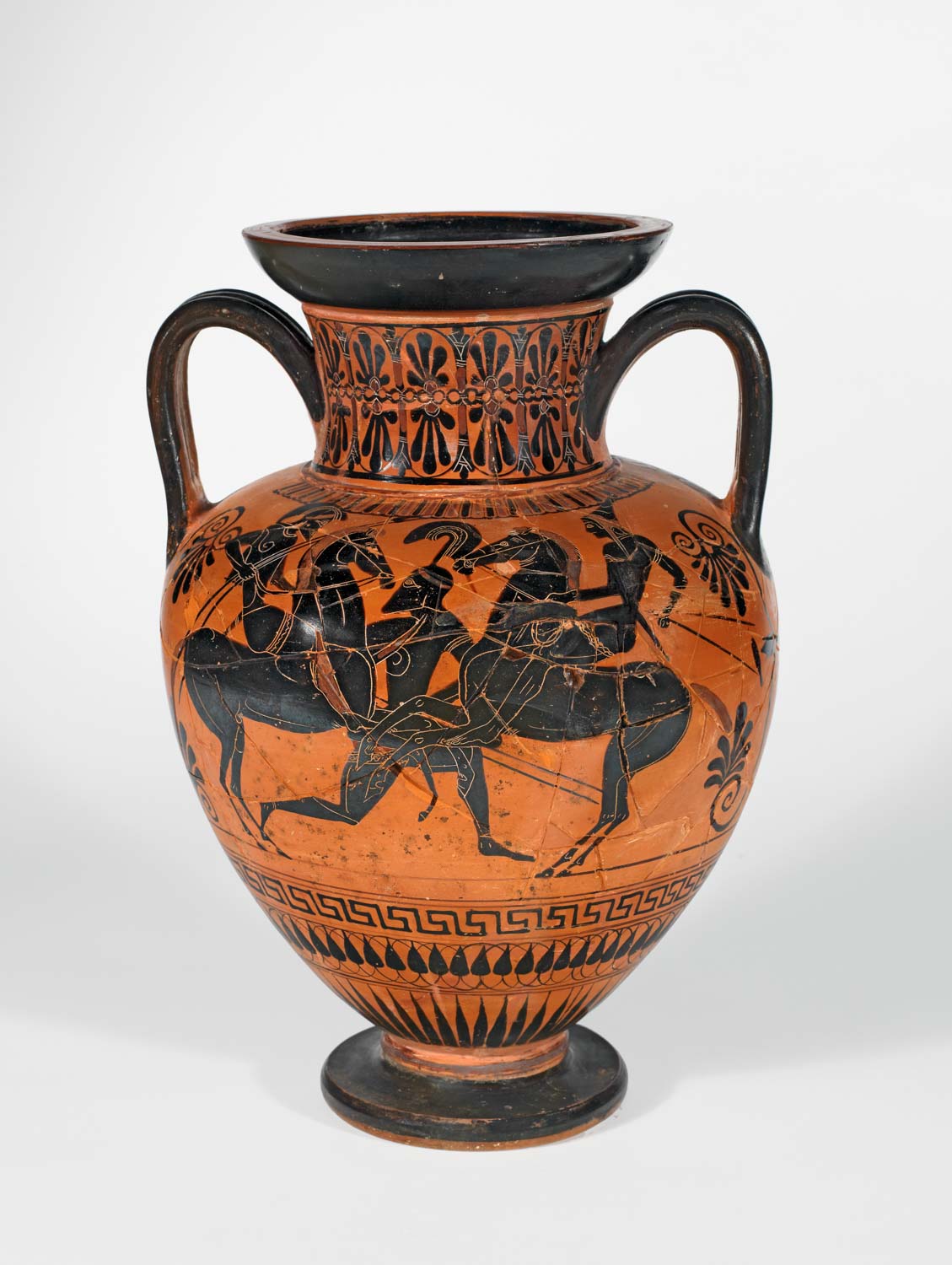 Pieter Brueghel the Younger, ‘A Village Festival in Honour of St Hubert and St Anthony’

What impression do you think Brueghel wanted to give of these villagers? Do you think he is shocked by some of the more boisterous behaviour on display? Or do you think he is enjoying the antics they are getting up to on a well-deserved day-off? There are layers in this story: look at the scene of the open-air play – what is this play about? (You’ll need to look very closely.) Do you think the crowds are enjoying a ‘bawdy’ play? How does this contrast to the religious procession to the right?

What other media could you use to tell a story? With access to a smartphone or tablet, you might want to try creating a simple animation to expand on the narratives told in these paintings. We like to use the free Stikbot app.  Take a look at this animated version of ‘A Village Festival’ made by Year 8 students from Soham Village College for inspiration:

Draw or paint the background from one of these paintings – ‘The Siege of Troy’ would work well. Choose a new narrative you would like to tell for your subject. Cut figures out from magazines or comics to add to your background using collage techniques. Make use of perspective and be sure to choose figures of an appropriate size, depending on whether they’re in the foreground (the front of the painting) or the background.

A synoptic narrative shows multiple actions in one single scene to try to convey a sequence of events. Sometimes the same figures are depicted multiple times in one scene, just like in the painting ‘The Siege of Troy’. Choose a story you would like to tell – it could be something you’ve read in a book, a historical event or something from your own life. In creating your own artwork, consider which actions you will need to include and whether you will need to repeat some of the figures to tell the story. When you are finished, challenge another member of your class to work out the story from your artwork. How tricky did they find it?

What ways do these artists use to tell a narrative?
Do they choose one moment to focus on, or do they try to tell multiple parts of the story in one painting?
Do they leave us on a cliffhanger, guessing what will happen next?

Are there ways these artists use to tell narratives which inspire you?
Think about how you might build on these ideas in your own artwork.

Think about whose narratives artists choose to tell in these paintings: heroes from ancient Greek mythology, figures from the Bible, people going about their everyday lives and characters created to tell a moral tale.

Where would you look for inspiration for your own artwork?

Download our Narratives scheme of work as a PDF.

This resource has been designed for teaching within your classroom and not to be used for any other purposes without the express permission of the Fitzwilliam Museum.

Some of the artists featured are in copyright and have been included with the permission of the relevant rights holders.

The copyright in all the images remains the property of The Fitzwilliam Museum, University of Cambridge.