Look closely at the painting by scanning it side to side. Start at the top and work your way to the bottom. What catches your eye? What could be about to happen?

Nonsuch Palace was built by Henry VIII. He wanted it to be better than any other palace ever built. If you could design your own palace from scratch, what would you include and why?

This painting is a great starting point for creative writing. What could be happening inside the palace? Where are the men galloping off too?

Create your own collage poem to tell us your story – instructions below. Read our  ‘Turrets and Tiaras’ story  inspired by this painting.

Do: Make a collage poem

What you will need: 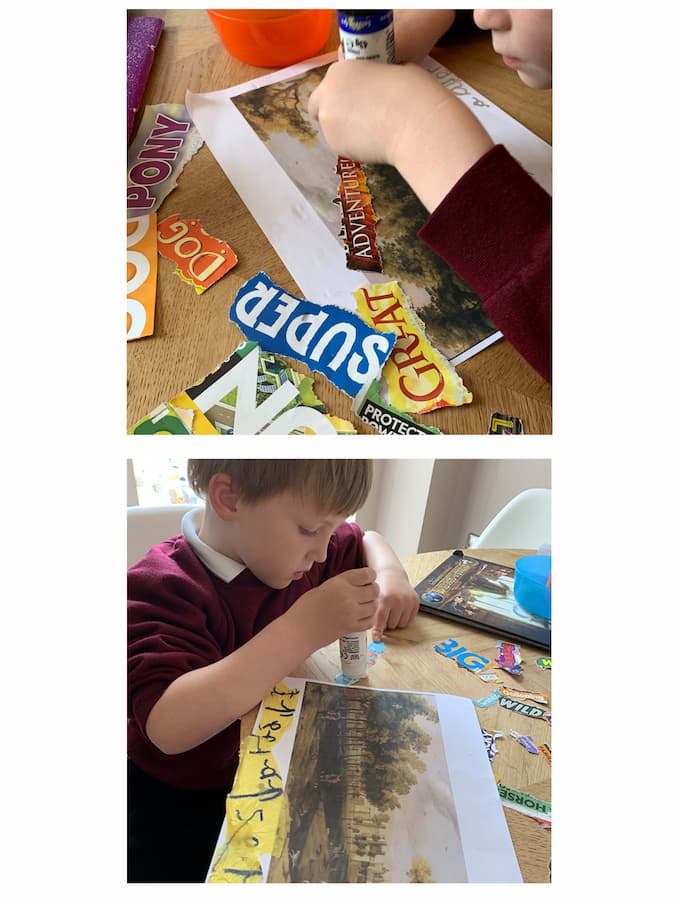 Nonsuch palace was a Tudor royal palace built by Henry VIII in Surrey in 1538. It was built to celebrate his thirty years as King, and the birth of his long-awaited son Edward. It was intended to be his grandest, most lavish palace, without equal (hence the name ‘None such’), built to match the French king’s Chateau de Chambord.

The palace was designed to be a celebration of the power and the grandeur of the Tudor dynasty. Unlike most of Henry’s palaces, Nonsuch was not an adaptation of an old building; he chose to build a new palace in this location because it was near to one of his main hunting grounds. However the choice of location was unwise, as there was no nearby water supply. The palace cost at least £24,000 (over 22 million pounds in todays money) because of its rich ornamentation and is considered a key work in the introduction of elements of Renaissance design to England.

Sadly the palace was incomplete when Henry VIII died in 1547. In 1556 Queen Mary I sold it and it passed hands multiple times through successive thrones, and civil wars, until Charles II gave it to his mistress, Barbara Countess of Castlemaine. She had it pulled down around 1682–3 and sold off the building materials to pay her gambling debts. Although the palace no longer exists, you can see the outline of its foundations from the air. Therefore records of its design and decoration are all the more important as they are all that remain.

Other depictions of the palace can be found in the collections of the Victoria and Albert Museum, and the British Museum.

This resource was developed to coincide with #ChildrensArtWeek. Children’s Art Week is run by Engage, the National Association for Gallery Education and supported in 2020 by Engage Scotland, Engage Cymru and The D’Oyly Carte Charitable Trust.